It’s very true when they say that you need to visit Nepali village to see the actual life of locals. With this in mind, we hit the road to find a bus to Bakhtapur, one of the best preserved medieval towns boasting with the tallest temple in the whole country.

Before checking out of the hostel in Kathmandu, a Japanese guy gave us the ticket to enter the city. It should have been valid for a couple of days. It should have saved us some money.

Kathmandu lacks signs, we asked for the directions to the bus stop. The bus was on the move, and without stopping, we had to jump into a driving bus with huge backpacks.

Local public transportation here works differently. Each vehicle has a “steward,” who stands in the doorway with half of his body outside of the vehicle, shouts the destinations. If someone agrees, he bangs on the car and lets the driver know to slow down. But it never stops, every passenger jumps into a moving vehicle.  You pay to the guy, not the driver.

The bus slowly gets crowded and overcrowded with no air to breathe. Approximately in an hour, we arrive in Bakhtapur.  The guy rips us off and charges us double. Additionally, he wanted us to pay for our backpacks.

Once we arrive at the entrance of Bakhtapur, the ticket I have turns out to be invalid. We could not afford to pay $15 per person.

This didn’t ruin our mood, and we decided to visit a nearby village, Changu Narayan. It is where Lord Vishnu resided.

Located at 1,541 meters above the sea level, it is one of the seven UNESCO’s World Heritage sites in Nepal. The two-floor roof temple has four entrances, each guarded by pairs of animals such as lions, elephants, sharabhas (a half lion half bird creature) and Griffins. The struts which support the roof shows ten incarnations of Lord Vishnu.

The entrance to the village costs $1 and can be entered several times with the same ticket. The community seems like an ‘open museum’ with beautiful people, typical Nepalese houses, simple way of life and peaceful atmosphere.

One of the locals, Krishna, owns two souvenir shops here. From him, I learn that Nepal is not an industrial country, and locals consume those few goods manufactured here. Carpet, pashmina and handy crafts are the only things they export mainly to China, India, and the USA. The whole country pretty much leaves on tourism and agriculture. Because of this, youngsters flee to Australia, Japan or USA.

He also told us that Nepal, same as India, has a caste system. However, the rules are not as strict as it used to. A legislation reform of 1962, made it illegal to discriminate against other castes. Education became free and open to all. Thus, as the representative of a higher rank he has to obey some social rules, for instance, he can’t drink alcohol in public places. 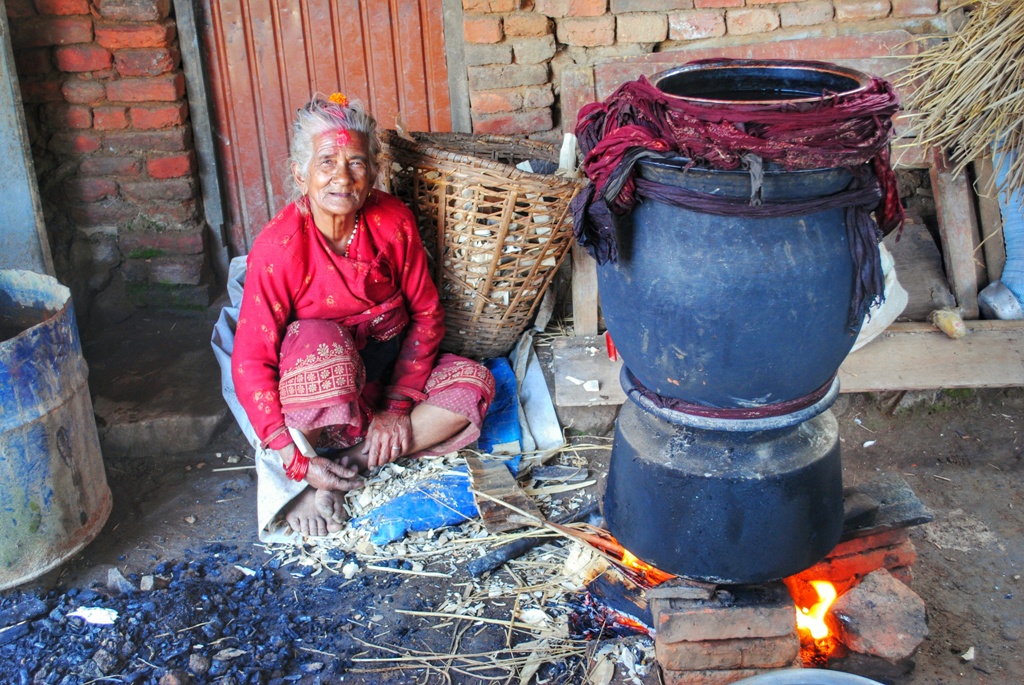 Even though Nepalese and Indian culture and traditions are very similar, Nepalese does not like when we underline the fact. The locals’ joke that Nepal stands for ‘Never Ending Peace And Love,’ while their neighbor India for ‘I Never Do It Again’.

We spent four days here and became “locals.” We knew that every morning our neighbor sat on the rooftop and painted the wooden masks for his son’s shop. Each evening ladies of the village would come to the spring near the guesthouse and collected water for their families. And each time we passed near the gate, people would ask how was our day and where we are going next. Even the ticket office would not check our tickets at the entrance anymore.

Unexpected Things That Blew My Mind in Bangkok

How to Spend 48 Hours in Kuala Lumpur

Cities You Should Never Miss in Thailand

Beautiful experience. There are so many such villages in India which still do not have technologies like mobile network or even electricity and lead an extremely simple life. Sometimes when i get super sick on noise, traffic and pollution i feel like running to such places! But then sense prevails haha and now i cannot live without these luxuries.

I think staying away from the tourist traps always helps us to understand how people leave, even the more so in Nepali. I’m sorry you had trouble with your bus ticket but at least you sorted it out by finding another village that you could visit!

This sounds like a magical experience, great tip about the bus and getting on or off it! We love to see real people when we travel and this sounds like just the place. Thanks for writing a great post

This was very interesting. How in the world did you jump on a bus with heavy big backpacks? Staying in that village you probably learned and experienced things that you wouldn’t doing the normal tourist trail. Good for you!

Sad that you got ripped off. We have not been to Nepal yet. We want to go for the Annapurna Base Camp trek. Did you feel safe travelling in the bus?

Yes it was completely safe

This website uses cookies to improve your experience. We'll assume you're ok with this, but you can opt-out if you wish. Accept Read More